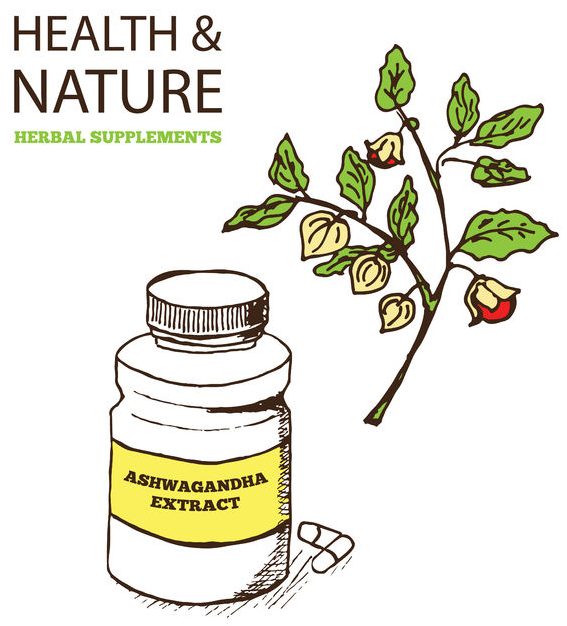 Ashwagandha, which is scientifically known as Withania Somnifera, is an Indian adaptogenic herb that is known to promote thyroid health.

Not only does it help balance your thyroid hormones it also helps restore your energy levels, prevent disease and some even believe it helps you look younger.

For hundreds of years, ashwagandha has been used in Ayurvedic medicine.

Nicknamed the ‘stallion’ of herbs, it’s shown amazing results when it comes to lowering cortisol and also balancing thyroid hormones.

On a play of its ‘stallion’ nickname, it’s also been dubbed India’s version of ginseng thanks to its capacity to enhance your stamina.

The Many Health Benefits of Ashwagandha

While Ashwagandha may be an unfamiliar household name, it’s well known amongst medical experts and researchers, especially in relation to thyroid health.

In fact, researchers have carried out well over 200 different studies when it comes to ashwagandha being able to:

The ‘stallion’, the ‘superstar’…call it what you like Ashwagandha’s effects on your thyroid health are amazing.

Despite scientists and researchers carrying out over 200 various studies, they admit they still don’t really understand 100% how adaptogens work.

However, what they do know is that they’re incredibly effective when it comes to balancing our hormones, so surely this alone means that there’s something positive about ashwagandha.

Probably one of the biggest benefits of adaptogenic herbs such, as ashwagandha, is that it can assist those people who suffer from both hypo and hyper thyroid problems.

Ashwagandha specifically has been shown to help and support a slow-working or inactive thyroid or for those people who’ve been diagnosed with Hashimotos.

In addition to this, ashwagandha has also proved to help the health of those with the opposite problem – an overactive thyroid or Graves disease.

It would seem with the findings and knowledge that we do have about ashwagandha, we can come to one conclusion – it helps bring your body back into a healthy hormonal balance whether your levels are low or high.

What is the Thyroid Gland and is it really that Important?

Every single person has a thyroid gland. It’s a small butterfly shaped gland that sits right at the front of the neck.

Although small, it is important, as it produces hormones that help regulate all your other organs in your body, which includes the skin, immune system, brain, kidney, liver and heart.

There are two main types of thyroid problems – hyperthyroidism and hypothyroidism.

Hyperthyroidism is when there’s an overproduction of hormones while hypothyroidism is the opposite (they suffer from a hormone deficiency).

Thyroid problems are more widespread than you might think.

In fact, hypothyroidism, which is considered to be a chronic illness, affects many people, however, it’s more commonly found in women. Researchers have even claimed that 10% of all adult females may suffer from some sort of hypothyroidism.

What the Ashwagandha Thyroid Health Studies Do Reveal

According to a number of holistic practitioners, the root of ashwagandha has special components that increase the liver’s glucose-6-phosphatase functioning, which in turn boosts thyroid functioning.

A 20-day study on mice that were given ashwagandha was carried out, and during that study, the mice’s T3 and T4 hormone levels were carefully studied along with lipid peroxidation (anti-oxidant protection).

The 20-day trial on mice revealed that ashwagandha significantly increased T4 serum, which suggests that it has the ability to stimulate a sluggish thyroid.

In addition to the above, it’s thought that ashwagandha also helps the thyroid function due to its ability to reduce lipid peroxidation by helping search for free radiacals that are known to be the main cause of cellular damage.

At present, there are millions of people around the world that suffer from various thyroid problems and the above results go to show that the Indian herb ashwagandha is powerful, and can also be extremely useful when trying to treat hypothyroidism.

Although extremely common, very few thyroid problems are actually diagnosed. There are more people that don’t know they’re suffering from these health problems than those that do, so it could be that ashwagandha may just be the solution they need.

Patients that have used ashwagandha over a short period of time have also reported that it has provided them with some relief from the more common symptoms or side effects of hypothyroidism, namely a decreased sexual libido and chronic fatigue.

A Closer Look at the Links between Ashwagandha and Hypothyroidism

It has already been mentioned that Ashwagandha helps ease the symptoms of hypothyroidism by stimulating the body’s thyroid gland into producing more of the T4 hormone, which according to researchers is a potentially sound natural way of curing hypothyroidism.

In 2014, a study of 60 patients was carried out. Some patients took a placebo while others took ashwagandha.

Those that took the latter saw a spike in their T4 levels, which resulted in the calming of hypothyroidism. Other factors that helped patients with hypothyroidism were the anti-inflammatory, antidepressant, antioxidant, and nerve-protecting properties of ashwagandha.

Usually, there’s also a danger of the body producing too much T4. An excess of this can cause oxidative stress, which often leaves the body incapable of fighting against reactive molecules, more commonly known as free radicals, which oxidize the cells’ lipid membranes in a process that’s referred to as lipid peroxidation.

In short, this process damages the cells, which, sometimes if left too long, is beyond repair.

However, this is where ashwagandha comes into play. As well as naturally stimulating the body’s production of the T4 hormone, it’s also a highly effective antioxidant.

As a result, it scavenges those nasty free radicals that are set out to destroy your body’s cells and slows down and reduces the process of lipid peroxidation and the consequences of oxidative stress. All of this helps keep the body’s T4 levels balanced to ensure there’s no risk of excess T4.

Ashwagandha and Hyperthyroidism – The Connection

Ashwagandha, Thyroid Health and the Increase in Stamina and Endurance

One of the consequences of a sluggish thyroid is the noticeable decrease in stamina and endurance.

However, taking ahswagandha has also been found to boost endurance, resulting in better concentration, motivation and stamina, hence the nickname, India’s answer to ginseng.

A study carried out on rats found that ashwagandha allowed them to swim twice as long in comparison to the same type of lab rats that weren’t given the herb supplement. Scientists believe that the ashwagandha herbal supplement has the same or at least similar effects on humans.

Therefore, it’s also believed that this herbal supplement could also prove promising results for athletes that need to up their training and improve their stamina.

Other side effects of poor thyroid health are irritability, anxiety, depression and general mood issues, all of which can be alleviated by taking ashwagandha.

Recent studies revealed that taking ashwagandha for both thyroid problems and irritability have similar effects to the pharmaceutical drugs imipramine and lorazepam, but without the negative side effects. This one’s a no-brainer really!

Over a period of 12 weeks, 87 participants that suffered from thyroid and anxiety related problems were either given 300mg of ashwagandha or placebos twice a day.

Those who were given ashwagandha showed that there were improvements in their thyroid functioning, anxiety and stress levels and that their focus had dramatically improved compared to those that had taken the placebo.

Another side effect of a compromised thyroid is adrenal fatigue and chronic stress, and this is another thing that ashwagandha can help improve.

Your adrenal glands are your glands that are responsible for releasing cortisol and adrenaline hormones when your body becomes stressed. This includes all kinds of stress from mental stress through to physical stress.

Adrenal fatigue, which is often connected to thyroid problems, is caused when too much strain is put on your adrenals due to any kind of stress.

In most cases, adrenal fatigue isn’t dangerous, but there are some extreme cases when your adrenals become too exhausted that your other hormones, which includes progesterone, are disrupted. When this happens, there’s a higher risk of lower DHEA and infertility. It’s also thought to accelerate the ageing process.

Probably the three most prevalent symptoms that affect people with hypothyroidism are depression, fatigue and brain fog.

Ashwagandha also benefits the brain’s health. Any kind of stress can have a detrimental effect on the brain and nervous system.

Again, the antioxidants are responsible for destroying the free radicals, which helps improve your brain’s health when you’re suffering from hypothyroidism, especially with brain fog and memory loss.

A case in point is a study that was carried out on mice that had Alzheimer’s. After 20 days of supplementing them with ashwagandha, scientists discovered that there was a significant reduction in their amyloid plaques, which are responsible for the degeneration of the brain.

Other Benefits of Ashwagandha

Other than improving your thyroid health and other thyroid-related problems, ashwagandha is also believed to help prevent and treat certain cancers, as the herb’s extract has a potent anti-tumour effect.

Again, it’s ability to boost the immune system and prevent and possibly kill off the growth of certain cancer cells all boils down to its antioxidant capabilities.

When you take ashwagandha in a supplement form, you’ll also boost your body’s white blood cell levels in your body, and this is the biggest indicator that your immune system is getting stronger and more able to protect your body from any potentially deadly diseases or invaders.

What’s more, it’s also thought that ashwagandha is helpful when combined with chemo as it assists in keeping the immune system strong during the chemotherapy sessions, which in turn helps prevent any secondary related diseases due to a compromised immune system.

To see improvements on your thyroid health and general well being, experts suggest taking 500mg of the ashwagandha supplement one to two times a day together with a diet that has plenty of healthy fats, fiber and proteins.

It’s also recommended to either cut out or heavily reduce grains and sugar from your diet to see the maximum positive effects of ashwagandha.